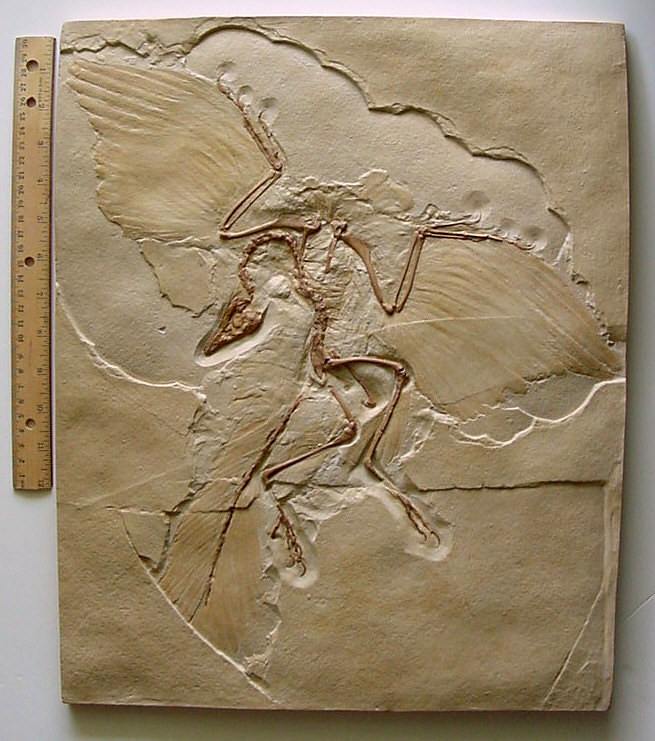 Archaeopteryx (pronounced arĺkee-opĺter-ix) means "ancient bird." This remarkable prehistoric creature lived during the age of dinosaurs, and is widely regarded as an intermediate form between reptiles and birds. It had feathers like modern birds and was probably capable of powered flight, but also had teeth, claws on its forelimbs, a long bony tail, and other reptilian features.

Only a handful of Archaeopteryx specimens are known. The Berlin specimen, discovered in the Solnhofen Limestone of Germany in 1876 by Ernst Haberlein, is the most complete and well-preserved. It is pictured in countless books, and is arguably the most famous fossil in the world. It shows the entire skeleton as well as a full suite of feather impressions. Paleontologist J. Ostrom described it as "the most valuable specimen of anything, anywhere."

Do not mistake this quality cast for sculpted or reproductions sometimes sold by others, or inferior casts made from worn molds - sometimes many generations from the original. This high fidelity cast was carefully made in high strength gypsum cement from an early generation mold of the actual fossil, providing exceptional clarity and details, including the tiny teeth in the jaw and the fine cross-veins of the feather impressions (not seen in most other casts). Also, unlike some casts that are just tinted or washed with color, this cast was meticulously hand painted to create a very accurate and realistic cast. It includes a hanger and full identification label on the back. Note that the mold was taken after the claws were drilled in recent years to further explose the fine claw tips--another positive feature not seen in many other casts. In short, this is a truely museum-quality cast of a famous, scientifically important specimen. It would make a great addition to any fossil collection, and a wonderful conversation piece and teaching tool. Size of slab: approx 14.5 x 17.75 inches.