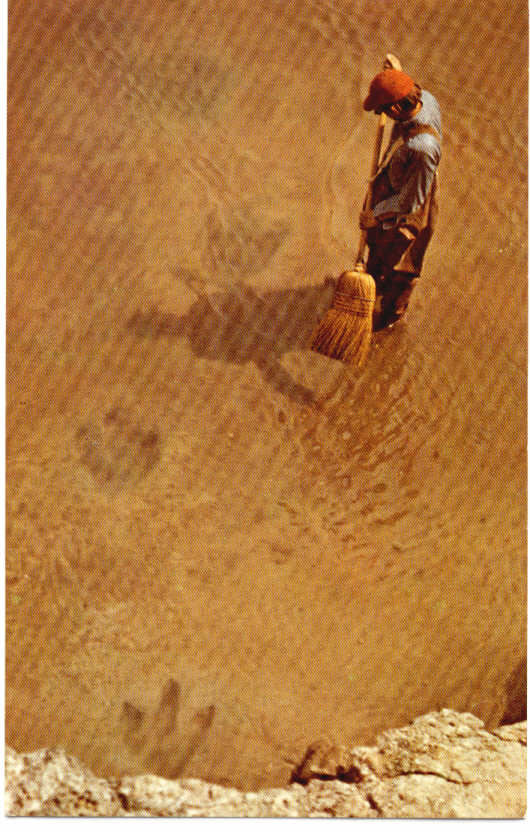 The Overlook Site (called "Site #2" in park literature) is named for the fact that in years past, one could look down from the cliff here and see some of the best tracks in the park, including a series of large theropod tracks that started at the south bank and marched directly across the riverbed. As shown in a post card from about 1970, shortly after the park opened, the first track was virtually perfect, showing very distinct pads. (The post card is still sold in the Somervell County Museum on the Glen Rose town square). Another photo (at right) shows one of our own field trip participants with the same trail, also taken around 1970. The trail was still fairly recognizable when I began working in the Paluxy in 1980, but by the early 1990's erosion had largely obliterated it. Just last month (July 2005) park personnel removed the viewing pipe at the top of the cliff that helped visitors spot one of the tracks. The print had become so faint the pipe no served much purpose. A few fairly good tracks remain close to the south bank, but one must hike down to the track bed to see them. Several others farther out in the riverbed here are fairly faint, and often recognizable only by the toe tips (often the deepest part of a track).

During the 1980's, I mapped a series of shallow but distinct sauropod tracks with unusual shapes a short distance east of the overlook site. These are now largely eroded away as well. A little further east still were several trails of fairly deep and distinct tracks. We mapped these and took latex molds of the best specimens.

One of the trails at the "Park North East" site had an astounding average pace of almost 2.5 meters, rivaling the fastest dinosaur trails known (see photo at right). Using a formula by R. McNeill Alexander to estimate a dinosaur's speed, this trackmaker is calculated to have been moving approx. 28 miles per hour. Such trackways (a few others are known) seem to settle the controversy about whether carnosaurs could run--at least for moderate sized individuals. Unfortunately, most of the trails in the "Park North East" are now under piles of river gravel.