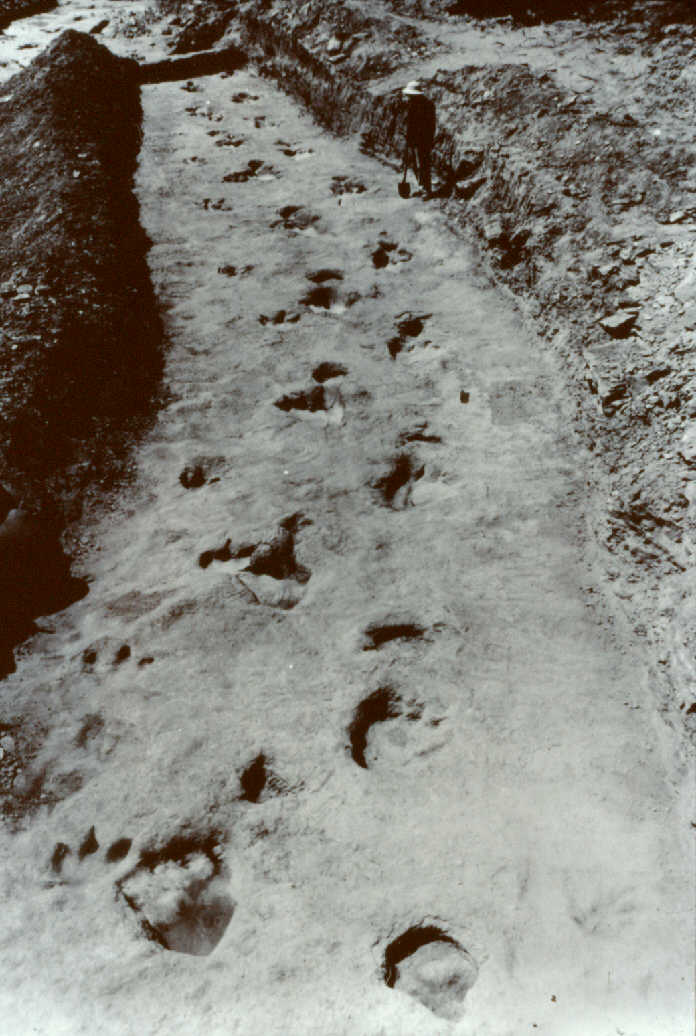 Just south of the "Main Site" is a track site that is usually under water and seldom visited by tourists, but which contains some of the most historically important and impressive tracks. These include the remains of Roland Bird's famous trackways along the west bank, which features several parallel trails of sauropod tracks and a theropod trail following the same path. This has often been interpreted as an ancient chase scene. Others suggest the theropod was merely following from a distance. Bird and a local crew removed several sections of these trails in the early 1940's, which are now exhibited at the American Museum in New York and a number of Texas museums and universities. Unfortunately, the removal of the tracks contributed to the disintegration of the track bed here, and the tracks that remain are significantly eroded.

However, on the opposite bank are three distinct sauropod trackays known as the Ozark trails, which are still in good shape. Mud tends to accumulate along this bank, helping protect the tracks. All of the sauropod tracks here are heading south--parallel to the R.T. Bird trails--and evidently represent a sauropod "herd." The prints vary somewhat in size; the largest are over a meter long.

They are called the "Ozark" trails because the first fairly accurate map of these trackways was made by a team from Ozark Bible College in the late 1970's. I and my colleagues (including Tim Bartholomew and Ron Hastings) extended and refined the mapping here in the 1980's and 90's. The prints in the Ozark trail closest to the center of the riverbed are the largest, show no front prints, and are unusually triangular in shape. Many show all five claw impressions, and in some cases, look so fresh they could have been made yesterday. One shows a large flap of mud (now limestone) squished up by the foot, and still hanging over the toe impressions (see middle photo at left). Numerous theropod tracks of variable quality are also found in this area also, including some of the best preserved specimens in the Paluxy. One is on the edge of a cracking section of the track bed and soon may be lost to erosion, however, a mold was made of this track a few years ago.

Many visitors ask: "Why are the tracks preserved in the riverbed, and why haven't they eroded away after millions of years?" First, when the tracks were made, there was no Paluxy river--just a vast mud flat. After the tracks were made in moist, limy mud, they probably dried out for a brief time, then were reburied with a somewhat contrasting sediment, followed by yet additional layers. There they remained, gradually turning to limestone over geologic history, until they were re-exposed in modern times when the erosive action of the Paluxy River, and in some cases human excavators, removed the overlying rock layers.