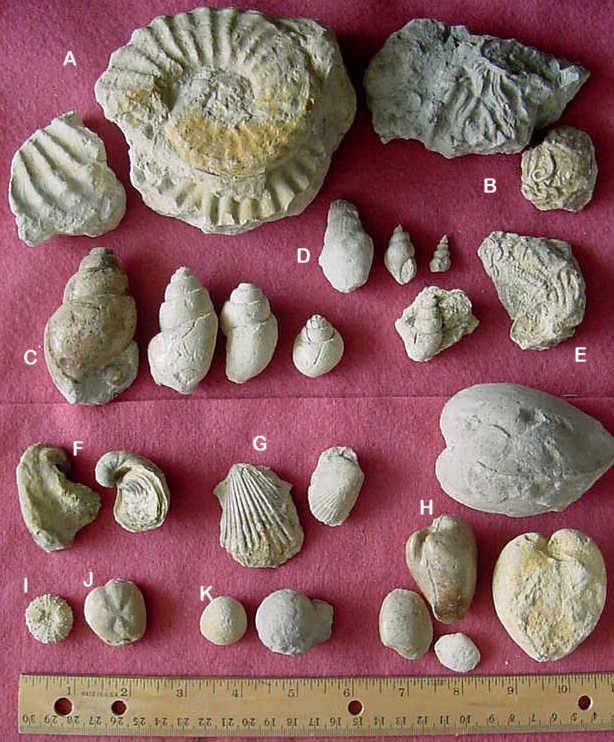 The Glen Rose Limestone formation is part of the Trinity Group of Lower Cretaceous Rocks. The famous beds containing dinosaur tracks in the Glen Rose, Texas area are near the base of the Glen Rose formation, at or near the Aptian/Albian boundary, dated at approximately 110 million years. The Glen Rose formation was deposited during the periodic retreat and advancement of a large shallow sea, which may be considered the ancient gulf of Mexico. The deposits represent low subtidal to supratidal environments and typically exhibits alternating beds of hard limestone and softer marl (limy clays and shales).

Some common types of fossils in the Glen Rose formation include A. Ammonites (coiled-shelled animals related to squid), B. serpulid worm tubes, snail steinkerns (internal molds) such as C. Tylostoma and D. Anchura, bivalves such as F. the oyster Texigryphea, G. the scallop Neithea (left), and the clam Lima waconensis (right), H. Various clam steinkerns, often called "deer hearts" by locals; I. regular (round) urchins, J. heart urchins, and K. Porocystis, which looks like a ball with many small pores and a larger opening at one end. It has often been mistaken for a sponge, but is actually an algal fruiting body. No official permission is given to collect at road cuts in the Glen Rose area, but here is a map showing some outcrops where fossils have been collected in the past. Be sure to check different areas and levels of a roadcut. Sometimes the fossils are very unevenly distributed. For more information on Texas fossils see Field Guide to Fossils of Texas by Charles Finsley, Gulf Publishing Co., Houston, TX, 1996, or any of the Texas Paleontology Series of fossil guide books from the Houston Gem and Mineral Society. For more information on the stratigraphy and geology of the Glen Rose formation, see the North-Texas stratrigraphy page at www.cretaceousfossils.com